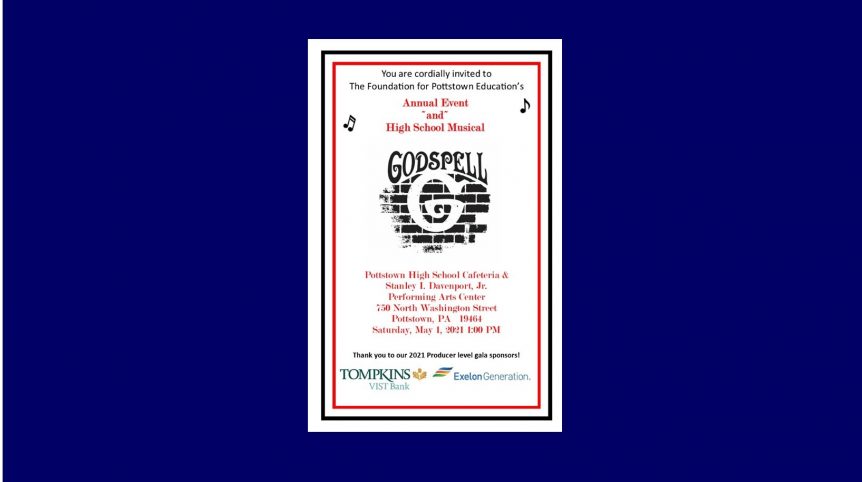 The highlight of the event is this year’s High School Musical, Godspell to be performed in the Pottstown High School’s Stanley I. Davenport, Jr Performing Arts Center.  Godspell is a musical composed by Stephen Schwartz with the book by John-Michael Tebelak. The musical is structured as a series of parables, primarily based on the Gospel of Matthew. Again this year the musical is produced by Mr. Robert Decker and directed by Mr. Christopher Sperat.

Due to the current COVID restrictions ticket sales will be limited to 119 and safety protocols will be enforced including social distancing and masks.  Also, the sit down dinner will be replaced with a takeout dinner prepared by the Pottstown High School Culinary Arts Program.

This is the third year that both Exelon Generating and Tompkins VIST serve as the main sponsor of the event.  The Foundation is grateful to both companies for their continued support of its efforts in raising funds for the 3,200 students of the district.

The doors will open at 12:45 and a brief program will be given starting at 1:00 followed by Godspell at 2:00.  After the completion of the performance, the guests will be directed to the cafeteria where they can pick up their dinner to take home.

The theme of the dinner is soul food and will include, bbq pulled pork, bbq chicken, fried catfish, jambalaya, ratatouille and mini cheesecakes.  There will also be vegetarian option.  The Culinary Arts program is under the direction of Chef Stephen Irick.

All proceeds raised from the gala and auction benefit the Foundation’s grant programs which help it promote opportunities for the children of the Pottstown School District.  A portion of the gala ticket price also benefits both the High School Musical and Culinary Arts Program.

Tickets for the Gala are $30 per person and include the dinner and tickets for the musical. To purchase tickets, please contact the Foundation Office at 610-970-6616 or email to jrusiewicz@pottstownk12.org.