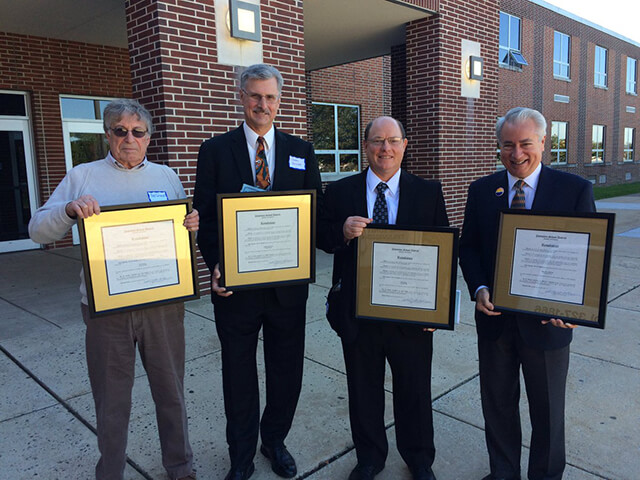 This was the 32nd Annual Alumni Honor Roll Induction Ceremony which recognizes Alumni from the Pottstown School District who have distinguished services as an individual or as a member of a group making a substantial contribution in his/her chosen business, profession, or military career or has exerted a positive influence in the civic and/or religious life of a community.

Jim Smale, PSD Class of 1952 was an outstanding musician who spent six decades (1957-2005) playing with an backing up the most noteworthy big bands and entertainers during that time period. Five years after Jim’s graduation, he played with the Glenn Miller Band at Sunnybrook Ballroom. Jim played in studio bands in Atlantic City, Philadelphia and New York. His most prized gift to the Class of 1952 was his original composition of a song titled “High Street Blues.”

Terry Zeigler, PSD Class of 1972 founded his own company, Data Cap Systems which develops and manufactures integrated electronic payment systems. He serves this company as the President and CEO. As co-founder of the Zeigler Family Foundation he helps oversee the foundation’s efforts to develop and implement financial literacy programs to local school districts. He and his family have endowed the Zeigler Institute for Professional Development at Bloomsburg University. He and his wife have endowed the College of Business at Bloomsburg University which has been renamed The Zeigler College of Business.

Jim Kerr, PSD Class of 1981 started his career in journalism at the Mercury in Pottstown. He became a reporter and eventually was promoted to copy editor and then city editor. During his tenure at the Mercury, Jim was recognized numerous times at the local and state level with awards for his coverage of the Pottstown community. Jim then moved to the Reading Eagle where he started as copy editor and over the past 19 years has held various positions with the newspaper. He is most proud of the fact that as a member of the press he has had the opportunity to tell the stories of the people in his community, to record history, make a difference, and be the voice of those who otherwise might not be heard.

Bruce Moyer, PSD Class of 1970 is an attorney and lobbyist in Washington DC. He has served both in private and governmental organizations for more than 40 year. As President of the Moyer Group, a consulting company in Washington DC, he had advised and trained clients in the art and science of advocacy. His area of expertise is in the administration of justice and law enforcement in government operations, including the U.S. Postal Service. Jim is the recipient of many professional and civic awards and is the author of numerous articles on government, law, and politics.