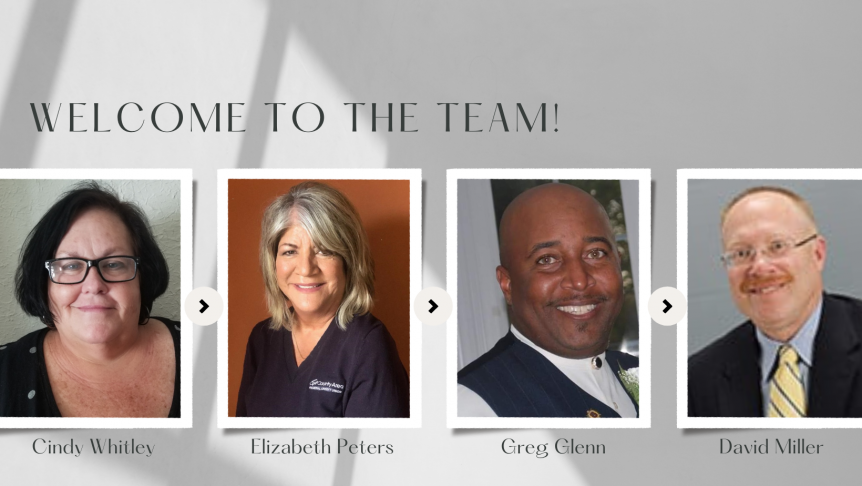 The Board of Directors for the Foundation for Pottstown Education elected four new board members appointing them to serve a three year term.  Gregory Glenn, David Miller, Elizabeth Peters and Cindy Whitley were all elected as a Board Member with their terms running through June 30, 2024.

The four new members were nominate by Judy Green, Chair of the Foundation’s Governance Committee and elected unanimously.  They will be replacing three directors who are retiring from the Board, Howard Brown, David Charles and Melissa Shainline.  In her motion to accept the resignation of Brown, Charles and Shainline, Mrs. Green applauded their services and stated that the acceptance of the resignations is done regretfully.  All three retiring board member have agreed to continue to serve on their committees, the Marketing Committee and the Development Committee.

Gregory Glenn is a Sales Representative for Schultz Technology in Pottstown.  Glenn is a 1987 graduate of Pottstown High School.  Upon graduation, he entered Kutztown University where he earned his bachelor’s degree in Management and Marketing with a minor in Computer Sciences.  Prior to his employment at Schultz Technology, Greg was the Membership Director of the Tri County Area Chamber of Commerce where he was responsible for selling new memberships to all businesses in the area and promoting networking and advocating business owners and employers in the community.  He has had several volunteer experiences in our community including Athletic Director for the Boys and Girls Club, a PIAA Basketball Official and a Basketball Coach for LPAA.

David Miller recently retired as an attorney for Dolan Law Group LLC after more than 24 years practicing law.  He was also a Commissioned Officer in the United States Army for 8 years as well as more than 21 years as a Captain with the United States Army Retired Reserve.  David is a graduate of Pottstown Senior High School, earned his Bachelor of Science degree at York College in Criminal Justice and his Juris Doctorate at Weidner University School of Law where he was a member of the Moe Levine Trial Advocacy Honor Society.  Miller was admitted to the Bar of the Commonwealth of Pennsylvania and the United States District Court for the Eastern District of Pennsylvania.  He has also been involved in our community serving as a Councilman for the Borough of Pottstown, Friend of West Point 2009 and USMA Admission Field Force Representative and a Board member for the Tri County Federal Credit Union.

Elizabeth (Liz) Peters is the Business Development Officer for the Tri County Federal Credit Union. Liz is originally from South Carolina but her family moved to Pennsylvania after she graduated from Irma High School.  She attended Midlands Technical College taking courses in Business Law when she decided to join her family and move to Pennsylvania.  Some of her community involvement include Build a Better Boyertown, FCB networking Group, Spring Ford Chamber of Commerce, and the Tri-County Area Chamber of Commerce where she is an alumni of the Leadership Tri-County Program. Liz also was the recipient of the 24th Annual Tribute to Exceptional Women Award.

Cindy Whitley is a Financial Assistance Coach at Montgomery County Community College.  Cindy grew up in Worcester, Pa and graduated from Methacton High School.  She attended Montgomery County Community College where she received her Associated Degree before enrolling in Albright College receiving her bachelor’s degree in Applied Psychology and Organizational Behavior.  Cindy earned her Masters of Education degree from Capella University.  Prior to becoming a Financial Assistance Advisor, Cindy was an Accounts Payable Specialist and the Assistant to Director of Student Activities at MCCC. Her volunteer activities include: Norristown Education Foundation Vice-President and Parent Club Parent Club Council Member, Big Brothers/Big Sisters volunteer, Pottstown C.A.R.E.S. and Montgomery County Community College Alumni Association Board.

The Foundation thanks the former Board Members for their commitment to our Foundation and the 3,200 students of the Pottstown School District as well as welcomes the four new Board members.

About FPE:  The mission of the Foundation for Pottstown Education is to raise funds for and support life-changing educational opportunities for the students and teachers in the Pottstown School District promoting the enhancement of our community.  Visit www.foundationpottstowned.org for more information about the Foundation for Pottstown Education.  You can also follow FPE on Facebook and Twitter.