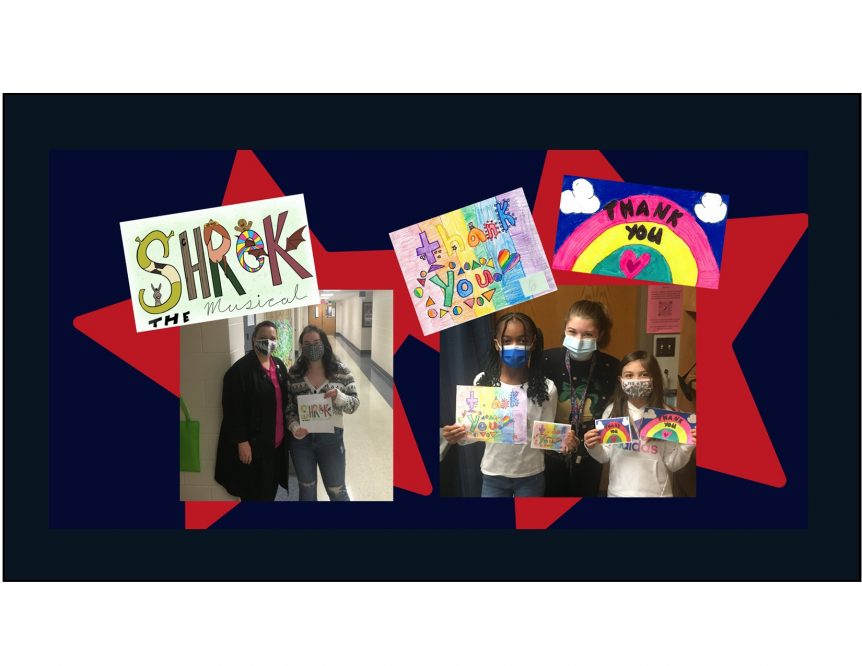 The Foundation for Pottstown Education reached out to the Pottstown School District Art Department for assistance in designing artwork for two projects.  When the Foundation’s Marketing Committee wanted to update the donor thank you cards and have input on the Annual Special Event designs, a call was sent out to the District’s Art Department.

The Art Teachers went to task by asking the students to come up with designs.  The Elementary Students were given the task of designing the Thank You cards that are sent out to all donors who support the Foundation, while the High School took on the Special Event logo design.  As a reward for submitting the winning entry, the artist were awarded a $50 gift card of their choice.  The Art Department also received a $100 award which will be combined with the annual $500 funding from the Foundation for a total of $600.  All six school’s art program will receive the $600 to be used toward a need for the department.

Students from all four PSD Elementary School participated.  More than 60 pieces of artwork were entered in the Thank You card design. It was now up to the Marketing Committee to select the winning designs.  After the top six designs were selected, a second and final vote was taken.  The winners were Ayva and Payton, both from Barth Elementary School.

Ayva said that she spent three days designing her card only to be told by her mother that she made a backward “u”.  She completed another version to submit and it paid off as she was one of the two students whose artwork was selected.  Payton got her inspiration in her room at home.  She liked the orange color and wanted it to have a lot of different colors.

Both students selected Amazon gift cards for their prize.  Payton used the card for her iPad while Ayva bought some toys for herself.  Ayva had also promised one of her friends that she would buy her something as well.  She lived up to her promise.

There were six designs submitted by High School art students using the theme of this year’s Special Event and the District Musical, Shrek the Musical.  The panel of judges for this contest were the members of the Foundation’s Special Events Committee.  The winning entry was designed by Maddie B who incorporated characters and scenery from the musical.  Maddie’s design was used for the event’s invitation and program.  Maddie also selected an Amazon gift card as her prize.

The Foundation is grateful to the art students and teachers for their support in these projects.