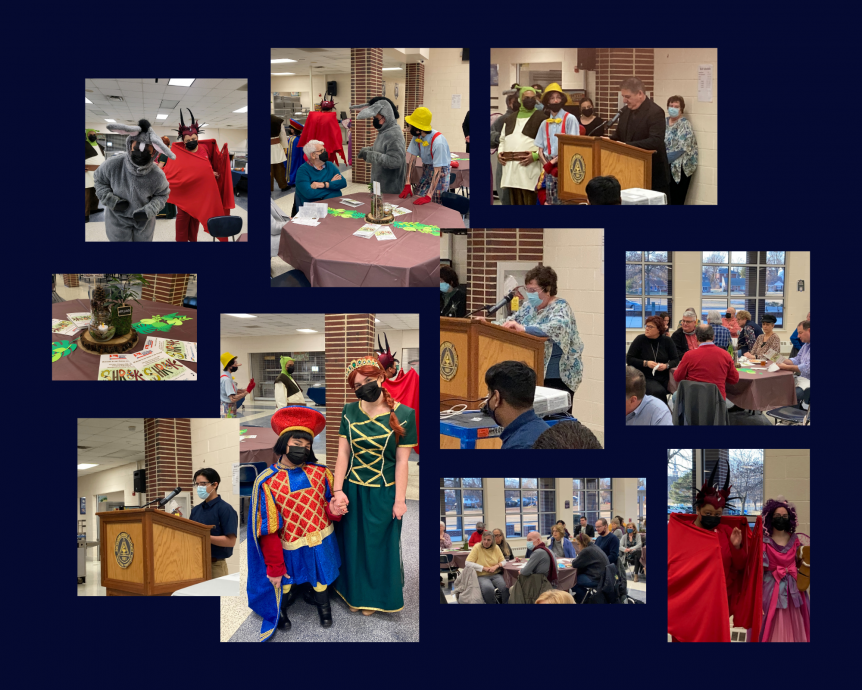 On Saturday February 26th the Foundation for Pottstown Education hosted 90 guests at the 7th Annual Special Event.  This event is in conjunction with the Pottstown School District Musical.  This year’s production was Shrek the Musical.

The Foundation’s Special Event Committee Chair, Sue Yocom welcomed the guests to the event in which the proceeds benefit the 3,200 students in the Pottstown School District.  This year’s event raised $14,000 which will provide funding to support programs and purchase equipment for the District.

The Producer of the musical, PHS Math Teacher, Bob Decker introduced the cast to the attendees and thanked the Foundation and donors for their support over the years not only for the musical but for other programs as well.  Mr. Decker shared that the Foundation has paid for the students’ tuition for the University of Pitt’s College in High School Calculus program that he teaches.  Upon successful completion of the course, the students earn college credits.

Mr. David Krabill, President of the Pottstown Area Health & Wellness Foundation, thanked and congratulated the Foundation and donors in helping to level the educational playing field through their fund raising efforts.  He reminded everyone of the need to continue to fight for fair funding until the state finds a way to distribute the educational funds equitably to all districts.

Mrs. Susan Lawrence, Psychology Professor at Montgomery County Community College and a member of the Pottstown School District Board of Education, thanked the Foundation for all that they do to support not only the students but the teachers of the District.  Sue has had the pleasure of having all of the students in the 9 cohorts of the Foundation’s Early College Program and praised them for their dedication to education.  Sue also shared the she worked with the PEAK program as well when she herself was an Early Education Instructor.

Mr. Anthony Pinos Castillo, a senior at Pottstown High School, reflected on his relationship with the Foundation.  Anthony is one of the students in the Early College Program and has earned 30 college credits that can be transferred to his college next year.  Anthony also thanked the donors who helped raised funds for the Construction Technology flooring that will be refurbished over the summer.  Anthony with assistance from Foundation Executive Director, Joe Rusiewicz, raised the funds necessary to complete this project.  In a two week period more than $11,000 was raised.

In the closing remarks, the Foundation Director, Joe Rusiewicz, ‘shrekognized” two special individuals, Dr. Tracey Brown and Mrs. Amy Francis.  Amy served as the President of the District Board of Education for the past six years before stepping down in December 2021.  Dr. Tracey Brown is finishing up her sixth year as Foundation President in June of 2022.  Rusiewicz stated the leadership of both woman was outstanding especially during the pandemic.  Both women were presented an engraved globe as a token of appreciation.

The evening then moved to the auditorium for the production of Shrek the Musical.  The guests were thoroughly entertained by our talented student actors and stage crew again this year.  This year’s musical was again under the direction of Mr. Christopher Sperat, teacher at Lincoln Elementary School.  More than 200 Pottstown students were involved in this production between the actors and stage crew.  This year’s cast was led by Devon Smith as Shrek, Makenzie Moser as Princess Fiona, Jonathan Moser as Donkey, Christian Toland as Lord Farquaad, Gabriella Horne as Dragon, Mama Bear, Tyler Broughton as Pinocchio and Josephine Bechtel as Gingy, Sugar Plum Fairy, Teen Fiona.  The cast and crew dedicated this year’s performances to Austin Spence a member of the PHS Class of 2020 who performed in Hairspray as Link and in Suessical the Musical as Horton.  Austin passed away unexpectedly earlier this year. The Foundation thanks all of our guests, sponsors, the PHS Culinary Arts Program, the cast and crew of Shrek the Musical as well as Chef Steve Irick, Mr. Robert Decker and Mr. Christopher Sperate for making this event successful and for putting the FUN in FUNd raiser!